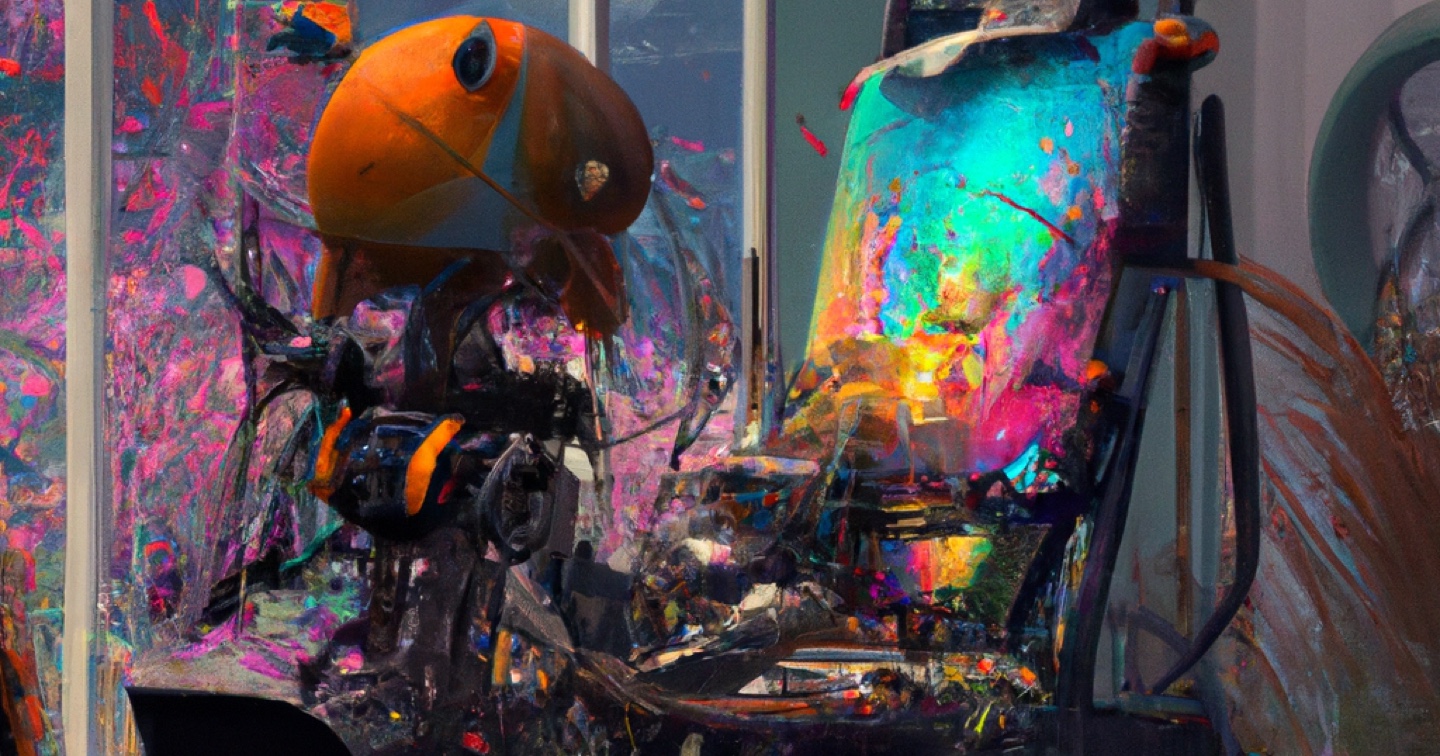 According to the World Economic Forum, Artificial Intelligence (AI) is expected to replace 85 million jobs worldwide by 2025. At the same time it is also expected to create 97 million new jobs. Some jobs are more obvious to be replaced than others, so what about artists? Is AI or more specifically DALL-E here to replace designers?

What the heck is DALL-E?

While it sounds a lot like WALL-E (and even the spell correction in Google Docs keeps trying to replace it with WALL-E), DALL-E has nothing to do with the computer animated science fiction film from 2008. It’s a tool for creating visual graphics using Artificial Intelligence powered by Machine Learning. DALL-E 2 is an advanced version that generates more realistic images at higher resolutions.

You simply type into a text field what you want it to draw and the algorithm takes care of producing the visuals. The results are mind-blowing as you might have already seen on social media. Here are some examples of the AI drawings that DALL-E 2 created: 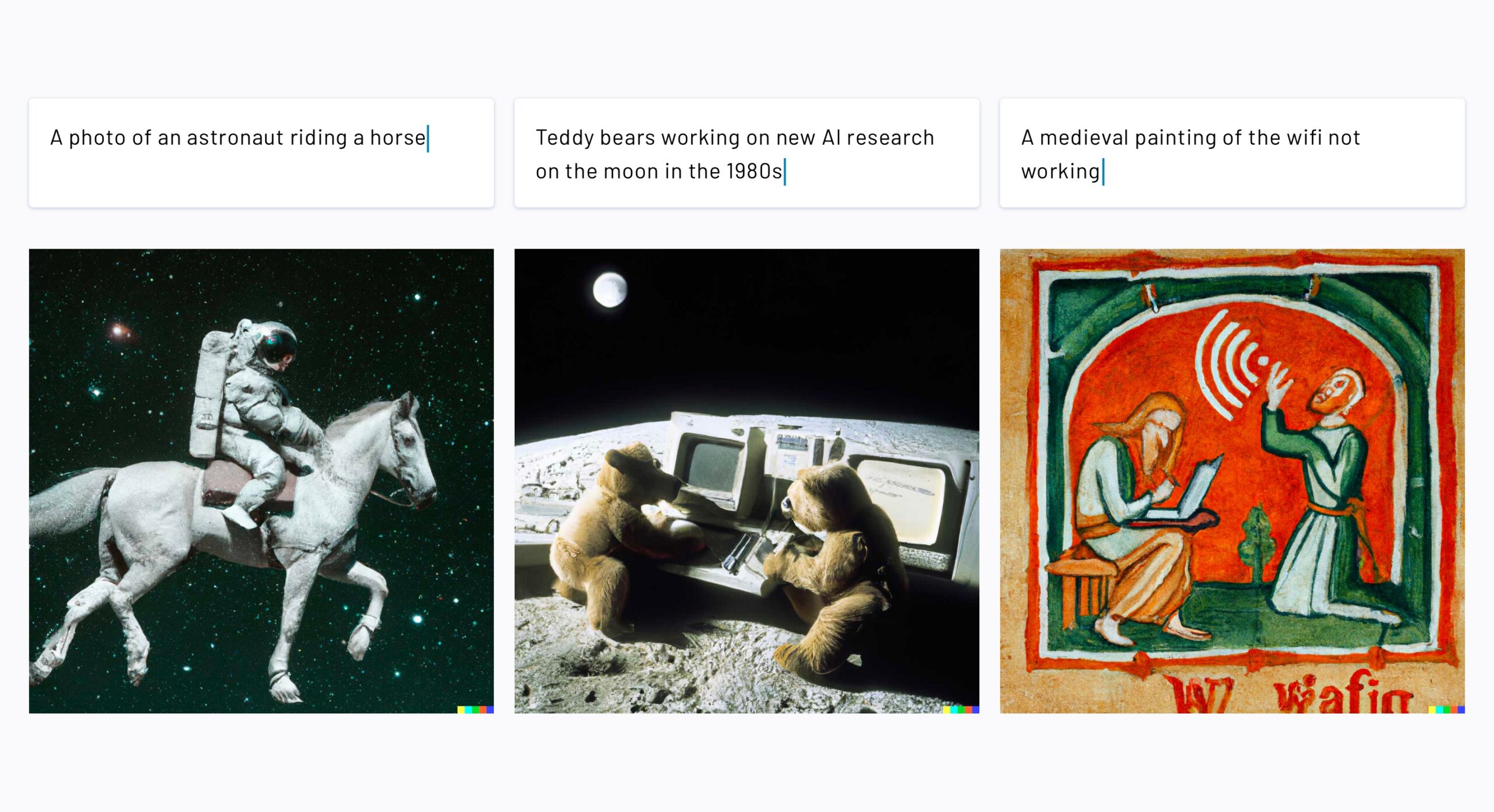 Believe it or not, no one had to use Photoshop, Procreate, or any other graphic design tool to create these images. The results are so surprising and accurate that this technology is already being used for multiple purposes.

For instance, Hans Petter Jansson is developing a point-and-click game using DALL-E 2 to generate the game graphics with an impressive result. Tamzid Farhan Mogno is also experimenting with using assets created by DALL-E 2 in an indie video game. And Don McKenzie knows that a blog post with images is more successful, but he doesn’t have the time or resources to create them, so he decided to use DALL-E 2 for his blog images.

Just like Don McKenzie we also generated the main image of this article with DALL-E 2. Can you tell?

Naturally, this makes you wonder how much time and therefore money DALL-E could potentially save a business that has to create graphics frequently, and more importantly it raises the question if designers will soon become redundant.

Looking back, we’ve seen innovations that have supported the evolution of a profession or skill without necessarily wiping it off the map. What started with cave paintings from the prehistoric era, later turned into paintings with brushes and pencils that supported us in expressing ourselves better. With the rise of computers, photo editing and vector illustration programs appeared, such as Photoshop or Illustrator. And now, new tools are beginning to emerge that are based on Artificial Intelligence and Machine Learning, just like DALL-E, Stable Diffusion, or nVidia canvas.

We’ve come a long way since smearing charcoal and iron oxide on cave walls. However, no matter how the piece of art has been created, they all have one thing in common:

There is a person behind the tool.

So why is there so much buzz about DALL-E potentially replacing designers and artists?

To answer this question it is essential to understand the technology behind it. As previously mentioned, DALL-E is based on Machine Learning. From a base of images,  it understands from which elements they are composed – faces, buildings, landscapes, animals, etc. Thanks to these resources, it can create new images by mixing various elements together that are requested by the user. The process is similar to what a designer would do in a photo montage: take two images that include what he wants to reflect and mix them together.

Although DALL-E is a compelling technology, what it produces is only a fraction of a designer’s job. The work of a designer is often associated with simply producing beautiful visuals, and wrongly so. Behind every design, there are many factors that go beyond the drawing or purely the aesthetics, such as the feeling that it should be associated with or how it should influence certain decisions. Images are a great resource to generate impact, but they aren’t the only thing that matters.

Look at the examples above. Which of the two is more appealing and convincing to you?

The first image is a DALL-E 2 creation, using the text prompt “flight attendant”. Not only is the face of the flight attendant kind of scary but 99% of the results were white Asian women which brings up a lot of questions in regards to discrimination, cultural biases and appropriation. But Machine Learning Bias is a topic for another time as it would exceed the scope of this article so we leave it at that for now.

We can probably agree that the second image is more appealing. However, it’s not just the image that makes the page attractive. The text also influences the decision making by using positive and creative copy.

Designers, No Need To Worry (Yet)

AI has helped game programmers to create strategies and animations with a realism never seen before. And AI-driven content creation tools are helping copywriters get out of their writer’s block and create better content. The same thing will be true for designers. It is certainly a new powerful tool that supports them but we believe DALL-E will not replace designers just yet.

Afterall, the system still requires a human being who knows how to best use it. In Photoshop you have to know the tools and how to apply them. With DALL-E you also have to know how to formulate the requests to create something usable.

Moreover, DALL-E used to require an invitation to use it and only recently it was changed to access through sign up. Despite being easily accessible now, it is not cheap to maintain. It requires a large data infrastructure and a powerful server to operate in the background. The fact that it’s a browser-based tool and therefore doesn’t need installation might give a false impression that it’s cheap or even free, but the reality is that expensive hardware is needed to keep the system running.

You should also keep in mind that a free account comes with only 50 credits and if you’d like to generate more graphics you need to buy more credits. If used for professional purposes with hundreds of requests, the cost can add up quickly.

Viral, But Not New

The technologies powering DALL-E, Machine Learning & Artificial Intelligence, aren’t new. Tesla has made its vehicles capable of semi-autonomous operation thanks to analyzing the surroundings of the car and making the computer decide what to do in each scenario. And when you talk to Cortana, Alexa, Siri, or Google you are interacting with a computer that uses these technologies to understand your requests and give you what you ask for (and yes, sometimes they fail, as they are still learning).

Our team at Mobile Jazz also works with these same technologies in various fields, such as automotive, medicine or security. Thanks to AI we were able to improve patient recovery processes by gathering exercise and performance data. We have also developed security solutions capable of matching image information with a database and verifying the identity and integrity of legal documentation.

These technologies have the potential to change the way we do things. It is a long and complex path, in which human work will always be required to improve the tools we have. We are inclined to think that, rather than taking away jobs, it will evolve them and create new opportunities. Perhaps there will come a time when we will have to adapt to new ways of working. But that’s old news, don’t you think?

Discover how we help innovate and add value to different industries here at Mobile Jazz.