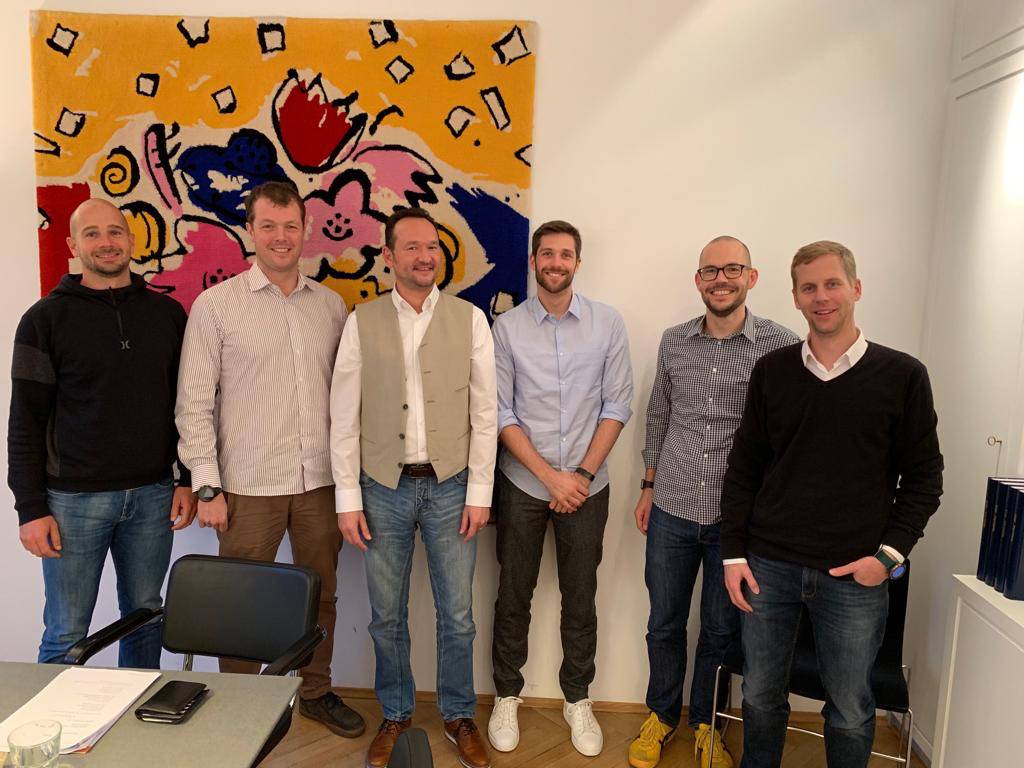 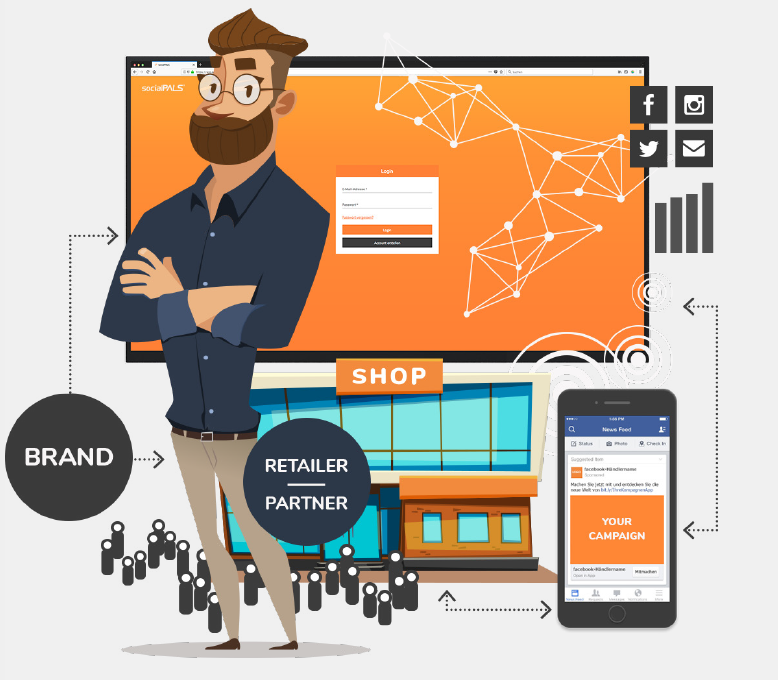 Partnerships are hatched in some funny places.

Ben and Jerry met while running round a track. Sergey Brin met Larry Page while giving him a tour round college. Steve Jobs and Steve Wozniak were introduced by a mutual friend, who thought they’d get along because they both loved practical jokes.

In the case of Mobile Jazz and socialPALS, our partnership began with a chance meeting on the Barcelona beach. And while we don’t expect to create anything like the world-famous companies we’ve just mentioned, we’re hugely proud of the partnership that’s blossomed between us.

Mobile Jazz and socialPALS have built a solution which could help brands everywhere forge better connections with their customers. And it could enable small retailers, the local stores that anchor our communities the world over, to access cutting-edge digital marketing campaigns.

The Mobile Jazz team are so proud of the socialPALS project, in fact, that we’ve just finalized a formal investment in the company. It’s an extension of the partnership we’ve already built; we already feel like we’re part of the socialPALS team, and vice-versa. One of our key goals at Mobile Jazz is to be partners, not clients, and that strategy has never been better demonstrated.

In this article we want to explain exactly why we’re so excited about socialPALS, and tell you how we’ve built such a solid partnership from scratch, creating a product which has attracted multinational clients such as Wilson and Salomon and built a network of 1,000 retail partners – all in less than 18 months. If you’re a startup entrepreneur looking for a partner, or you’re struggling to build a relationship with a company that’s very different from your own, we hope you find it informative.

Our co-founder Stefan is a huge fan of kite surfing. It’s taken him round the world and it was the precursor to his meeting with Sirick Wohlers when they both lived in Barcelona. The pair started chatting on the beach and remained in touch when they left the city.

In 2017, Sirick reached out and said he had the idea for socialPALS. He and his co-founders, Bastian Müller and Leonard Meisels, had already formed their own company, but they’d started as a traditional agency. Now, they wanted to launch a very different project.

Bastian, who has played an integral role in co-ordinating the work with Mobile Jazz takes up the story.

“We were using our conventional agency as a testing ground to evaluate the potential for a technology-enabled marketing platform,” he says. “At that stage we weren’t planning anything on the scale of what we have today.

“But as we worked with Mobile Jazz, we quickly realized that there was much more potential in the platform and a lot more processes that could be automated.”

Ok, we’re going to jump forward a bit now and explain what socialPALS does. We’ll go back to the original storyline shortly. Hope that’s cool.

socialPALS helps SME retailers tap into quality marketing materials, using brands’ own funding. The way it works is actually quite complex, but we’ll try to explain it using a quick example.

One of socialPALS’ clients is a major renowned German sports brand. The brand sells the majority of its products through local stores, but before socialPALS, they had trouble connecting with their retailers.

They previously used a ‘brand center’, a download portal where they stored banners and other marketing material for their retailers to access, and then publish. Unfortunately the retailers in their network had little marketing or no design knowledge, so no-one used the portal. The brand’s network of more than 300 retailers managed a grand total of five posts while they were using the network!

However, once they started using socialPALS, the brands’ retailers could access its marketing materials easily, and post the materials directly to their Facebook page. They could even use the brand’s own budget to promote the material, and order the matching point-of-sale marketing assets. The whole process was suddenly much easier.

With the socialPALS platform, the brand’s retailers published over 300 posts in the space of six weeks – a slight improvement on what they’d produced earlier! The approved marketing material was communicated in several local newsletters, and the brand got very positive feedback from local retailers on how easy the process was.

This is a huge success for local retailers, helping them drive online customers to their stores. The brand, meanwhile, has been able to boost its target audience through local influencers, namely the retailers, and increase its reach by a factor of 60!

How We Built It

Ok, where were we? Ah, right, we were talking about how the project started.

So, the socialPALS guys had this idea for a tech-enabled marketing platform. They’d seen how the traditional marketing agency model worked, and wanted to build something that would make the whole brand-retailer process more efficient, while empowering smaller retailers to compete with more technically enabled counterparts.

At first, the idea was fairly straightforward. The socialPALS team wanted to provide a platform that would simply automate the campaign registration process for retailers, removing the need to sign up with an old-fashioned pen and PDF.

However, in tandem with Mobile Jazz they soon decided to build something far bigger. A platform that could automate all the key processes in a digital marketing campaign.

This vision, which would eventually become socialPALS, was designed to resolve a number of specific problems:

A project this disruptive, and ambitious, required a huge amount of planning. We didn’t have any precedents or templates to use as reference points.

Yet for Mobile Jazz, the real challenge was simplicity. We’re lucky enough to work on highly technical projects all the time, but here the goal was to make the UI and UX so simple that literally anyone could understand it.

Many of socialPALS’ retail clients are unfamiliar with even basic technical terms such as ‘browser’, and the platform had to be built with them in mind. Complicated digital procedures had to be distilled to just a few clicks, via an interface that was inclusive for all. This wasn’t a technical challenge, rather a design one.

“Prior to hiring Mobile Jazz, we had no internal IT knowhow,” he recalls. “We had a great idea, but didn’t have the needed IT manpower to deliver it. We had to make a call between building up an internal IT team or working with a very skilled team of international developers at Mobile Jazz.

“Suffice to say we made the right decision!”

How Did Mobile Jazz Solve the Challenge?

socialPALS was given a dedicated project manager in Fran, who has run a startup business himself and knows the challenges involved.

Through daily Slack chats, weekly meetings and tri-monthly on-site workshops, Fran and the team studied socialPALS’ operation and worked out their technical challenges. They soon became part of the socialPALS team, thinking from their point of view.

This insight enabled Mobile Jazz to offer bespoke expertise. Fran’s team didn’t just produce great functionality; they developed a strategy to utilize the new technology going forward. One particularly cool example was the addition of Intercom within the platform, which was suggested by Mobile Jazz and has become a key part of socialPALS’ offering.

In addition, Mobile Jazz introduced the socialPALS team to different ways of working, encouraging them to adopt tools such as Trello, Asana and Slack. It’s something we’ve done with other clients, such as Medtronic, helping them optimize their way of working, not just the project we’re building together.

Bastian says: “The collaboration allowed us to continue focusing on our customer acquisition and research our customers’ needs, while Mobile Jazz focused on designing and building adequate solutions.

“The two sides have a very close working relationship, and Mobile Jazz has helped us introduce project management tools which have had a profound impact on our company.”

Having only launched in February, socialPALS has already realized €400,000 ($450,000) in revenue and become profitable. It’s a fantastic achievement for a startup less than a year old, even more impressive given the company has bootstrapped rather than seek external funding.

Over 20 major brands have been signed up, as well as 1,200 retailers and 300 multipliers – companies that take social media content and distribute via their own channels.

Now, socialPALS wants to become the one go-to point for brands to include local retailers in their marketing. Moreover, they are already moving beyond the German-language market (Germany, Austria, Switzerland) and going international.

As it grows, the company wants to keep making the experience easier for the retailers that use its platform. The goal is to create a truly ‘one-click’ solution. At the moment the platform is tantalizingly close, but not quite there.

Bastian says: “The vision is for socialPALS to be a complete marketing solution for anyone, no matter their technical expertise. So even someone who has no knowledge of technology can plug into the socialPÀLS platform and run their campaign.

“Big retailers often will have their own marketing team – their whole day is about optimizing marketing communication. But socialPALS is aimed at those 80% of retailers who don’t have this, and need to plug themselves into a simple platform instead.”

Mobile Jazz has given the company a scalable, sustainable base, and Bastian is thrilled by the way the project has developed.

“For me MJ is not only a service provider,” he says. “The MJ team give their own opinion to each topic. They think about the whole process. My feeling is that they work for socialPALS!

“They think of the project as if they work for the company themselves. That’s the greatest benefit. They complete the project, and then go above and beyond.

“We deal with retailers and brands on a daily basis and understand their needs. Mobile Jazz has done likewise: Fran and the team have adjusted their mindset, and adapted to our own needs.”

For Mobile Jazz, the main attraction of socialPALS is the strength of the product – and, even more importantly, the team. We only invest in companies that we’re working directly with; we want a genuine stake in the company, a real day-to-day involvement rather than just a financial interest.

The bonds formed across the two teams teams have built a huge amount of trust. The culture of respect at socialPALS, its keenness to partner with clients, reflects Mobile Jazz’s own values.

Indeed our work with socialPALS demonstrates everything that Mobile Jazz stands for. We’ve moved past the usual client-agency relationship, building something better for both sides. We’ve identified a genuinely disruptive idea and shared the challenge of delivering it. And we’ve shown that we’re way more than just a design agency.