Mobile Jazz in 2020 and the Future of the Mobile Industry 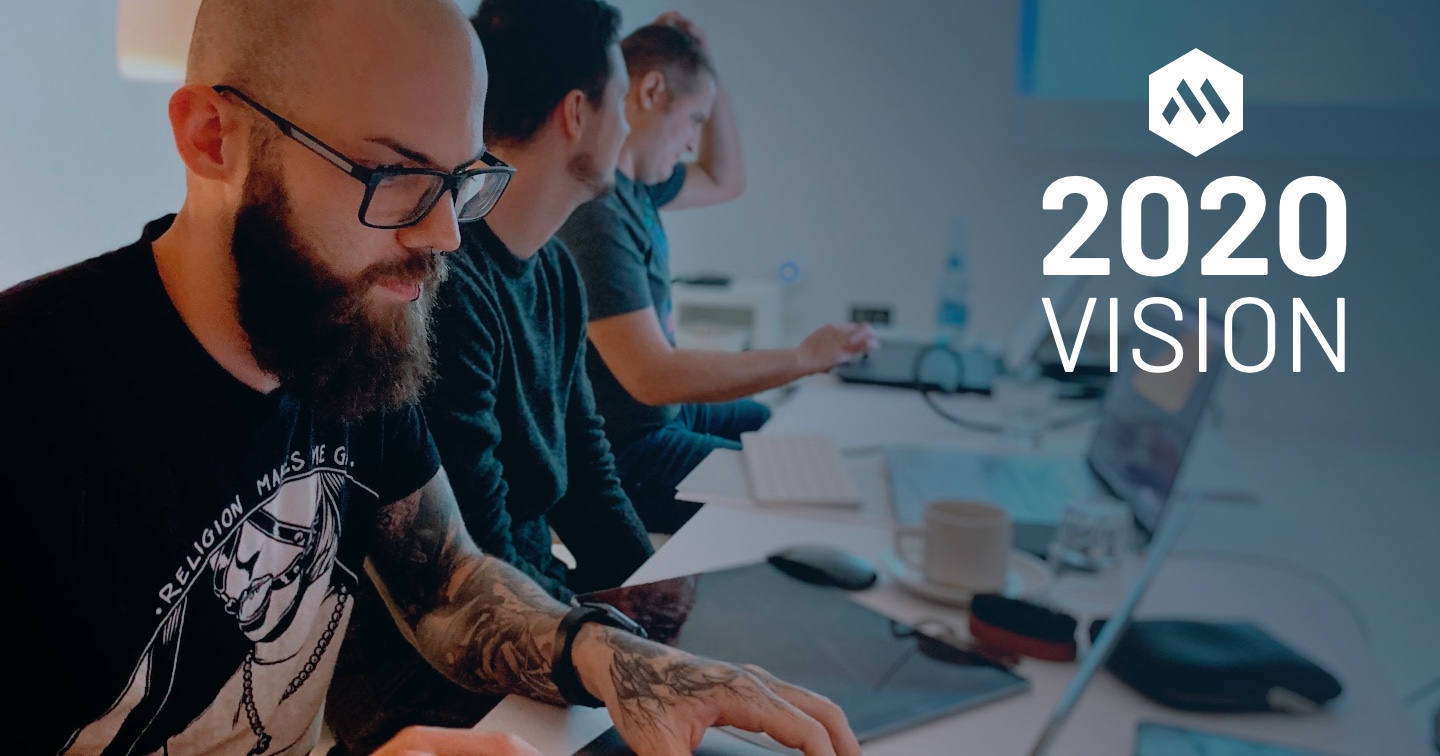 TL;DR: This article is about the evolution of the software industry and the technologies that we think will have the biggest impact in the future. It’s also about our own development as a company in response to these changes.

The app originally relied on a traditional heart-shaped icon to convey attraction, before one of the co-founders came up with the swiping idea while cleaning his bathroom mirror. And a viral phenomenon was born, changing the dating world forever.

Why do we mention this, you ask? Well, first of all, we love a good bit of trivia at Mobile Jazz. But it also demonstrates how the software industry is constantly evolving. Behind any globally successful product, you’re likely to find a Tinderesque transformation. Apps such as Uber, WhatsApp and Instagram have all changed radically since they first went live.

In such a remorselessly creative environment, it’s only right that the companies building these apps keep evolving, too.

In this blog post, we’re going to discuss the evolution of Mobile Jazz, and the wider transformation of our industry. We’ll touch on the origins of our journey, and tell you where we’re headed in the next few years. In the process, we’ll map out the software industry’s wider direction of travel based on the insight we gain day in, day out as developers.

My co-founder Jordi and I created Mobile Jazz in 2012, a year after we met. But our origin story begins way before that.

We’d both begun building our own apps way back in 2008, when the Apple App Store was still brand-new and only had 500 releases in it. A primitive world in which the best-selling app was called Koi Pond and basically involved prodding a static puddle of water with your finger to create a ripple (exciting, right?)

I’d trained as an electrical engineer before being enticed by the buzz around mobile technology. Jordi was an IT security consultant at Deloitte for the financial industry, before deciding to create his own projects. By the time we met, I’d worked on a number of apps including bliquo, Siine and Fogg, the last of which was later acquired by Skyscanner. Jordi had created the inaugural app for pan-European mobile operator Simyo.

In the eight years since Mobile Jazz started out, we’ve become a 20-person business with seven-figure turnover. We’ve branched out from mobile apps and become a fully-fledged software company, creating dedicated teams for mobile, websites and backend services. And we’ve spun out an internal experiment, which strove to log glitches in our products, into a separate company called Bugfender.

Our approach to design has changed, too. Like most app developers (including the guys who created Tinder), we started off building flat, plain, icon-heavy designs. But over time we’ve migrated to a richer visual experience, using colors and intuitive functions to help the user navigate around the page.

We’ve been lucky enough to notch some major successes along the way. We’ve built AVG’s antivirus app, the first one of our releases to reach 100 million downloads. We’ve delivered bleeding-edge products such as Nifti, which provides real-time performance data from military jets at 3,000km/h. And we’ve worked with startups and socially focused projects which have built a whole business model around their mobile apps, such as Class Dojo, Worldreader, MyMoments and PeerWell.

Looking to the Future

Now, with the dawn of 5G and a whole bunch of other technologies, we’re facing a new stage of innovation. Specifically, we see the software industry being dominated by three very specific trends during 2020.

At present, the lack of cross-over in programming languages means that, if you want to build an app for both iOS and Android, you have to write the code twice. No matter whether you’re building for web, mobile, desktop or embedded devices, you have to create each version from scratch.

But this is starting to change. We’re seeing the growth of multi-platform languages such as Kotlin Native, which allows developers to write one single base of code and translate it for both iOS and Android.

This is a key focus for Mobile Jazz. We’re one of the early adopters of Kotlin Native, and we’re committed to using it across our projects (you can read all about it here). What’s more, we’ve created our own open-source framework called Harmony, a place to store a bank of essential code which can be used in each of our projects, from embedded systems to IoT, smart home to medical devices.

The migration towards cross-platform programming is still at an early stage, but it’s something we strongly believe in. We’re already seeing significantly reduced costs, as well as improved quality of code. Our engineers are able to spend more time on the advanced stages of their projects, which translates into better results for the client.

There’s a whole heap of hyperbole and misconception around this topic. A lot of commentators have been suckered in, convinced we’ve already breached frontiers which, in reality, are still distant specks on the horizon.

To deliver true AI, we’ll need to create machines which can emulate every single human task, not just some of them. The concept is known as ‘artificial general intelligence’ (AIG) and, at present, that’s several years away. What’s more, the potential of machine learning still outstrips its real-world practicalities (a subject we’ve written about in a recent blog post).

However, both AI and machine learning are already huge parts of our daily lives. In fact, we don’t think software in 2020 can do without either of them. Our engineering team has been experimenting with these technologies for years and we’ve now got a production-grade project in operation.

The project has been created for PeerWell, a Silicon Valley startup in the medical space which creates pre- and rehab programs for surgery patients (and has even enlisted injured American football stars to help design them). Our new project uses AI and machine learning to detect hazards around the home, such as wires and bath mats, and you can read all about it here.

On a side note, we’re not fully convinced by the real-world promises of a blockchain, not yet at least. For all its potential to democratize human transactions and provide a reliable, corruption-free mediator, we’ve still to find a clear use case in our line of work. However, we continue to play around with the technology internally and it might deliver major disruption one day, so we’re keeping a close eye on it.

At Mobile Jazz, we’ve been remote since day one. It’s fundamental to our company culture and one of the key factors in the stability of our team.

Over the next few months, we’re going to see more and more companies follow our lead. Two-thirds of remote companies already allow some form of remote working and this number is only going to continue northward, as telecommuting technology continues to improve and the concept of flexible working gains traction.

On one hand, this is a vindication of our own approach, which is satisfying in itself. On the other hand, however, it means more and more companies will be competing for remote talent, so we have to keep upping our own game.

Workplace culture has always been a key focus for Mobile Jazz. We strive to optimize for happiness, a mantra which places people before profit. In our experience, technology enthusiasts have never been driven solely by money; they’ve always been drawn to teams that care about them, value their opinion and provide everything they need to thrive. Companies where the colleague, not the customer, is king.

We’re going to continue honing our company culture in the months ahead. Last year we released our first-ever company handbook, which has achieved over 150,000 downloads at the time of writing. The handbook codifies our company culture and is designed to provide a single reference point for all companies that work remotely (or are thinking about it).

Not only that, but we’re going to keep investing in our team. We’ve always held weekly 1-hour workshops called MJ Talks (similar to TED Talks), but in 2019 we made a big decision to fly everyone in the team to a one-week educational retreat called MJ University, which we’re now going to repeat every year.

We see this education as a crucial support for our team members. In today’s world of constant technological change, software professionals can’t afford to stop learning; the idea that you can simply study once, and rely on that knowledge bank for your entire career, is as obsolete as the floppy disc or fax machine. But companies must also keep improving, and updating their collective knowledge bank. So events such as MJ University help the entire organization, not just the individual concerned.

If you think the speed of evolution over the last 10 years has been fast, the next few decades are going to be even faster. At Mobile Jazz, we’re privileged to have a team of highly motivated and self-driven tinkerers, constantly pushing the boundaries of new technology. It’s only right that we give them the resources they need to keep going.

Despite all the changes we’ve mentioned and the improvements we plan to make, some things at Mobile Jazz will stay the same, in 2020 and beyond. The core spirit, the mission to be more than just a company, will never be dimmed or diluted.

We’re not just a team of developers. We’re an interdisciplinary collective drawn from all sorts of backgrounds, such as design, engineering, computer science, mathematics, 3D modeling and animation. What unites us is our curiosity, our desire to keep exploring.

We don’t just go to work to write software. We want to innovate, tinker and challenge ourselves. We want to work on the next big thing, not the last one.

Over the next few years, Mobile Jazz is sure to undergo further changes. If you’re reading this in 12 years’ time (by which time your network will be so fast that the page will probably load before you’ve even typed in the URL) we may have pivoted into a different area entirely.

We might be building nanotech, driverless vehicle systems or any of the other exciting innovations coming down the pipe. We might even have engineered the next big dating app, wiping Tinder off the map (although, to be honest, that’s not on our to-do list right now).

But the core of the company won’t have changed. We’ll remain committed to innovation, and to staying at the forefront of our industry. Wherever our industry goes in the next few years, we’ll be along for the ride.