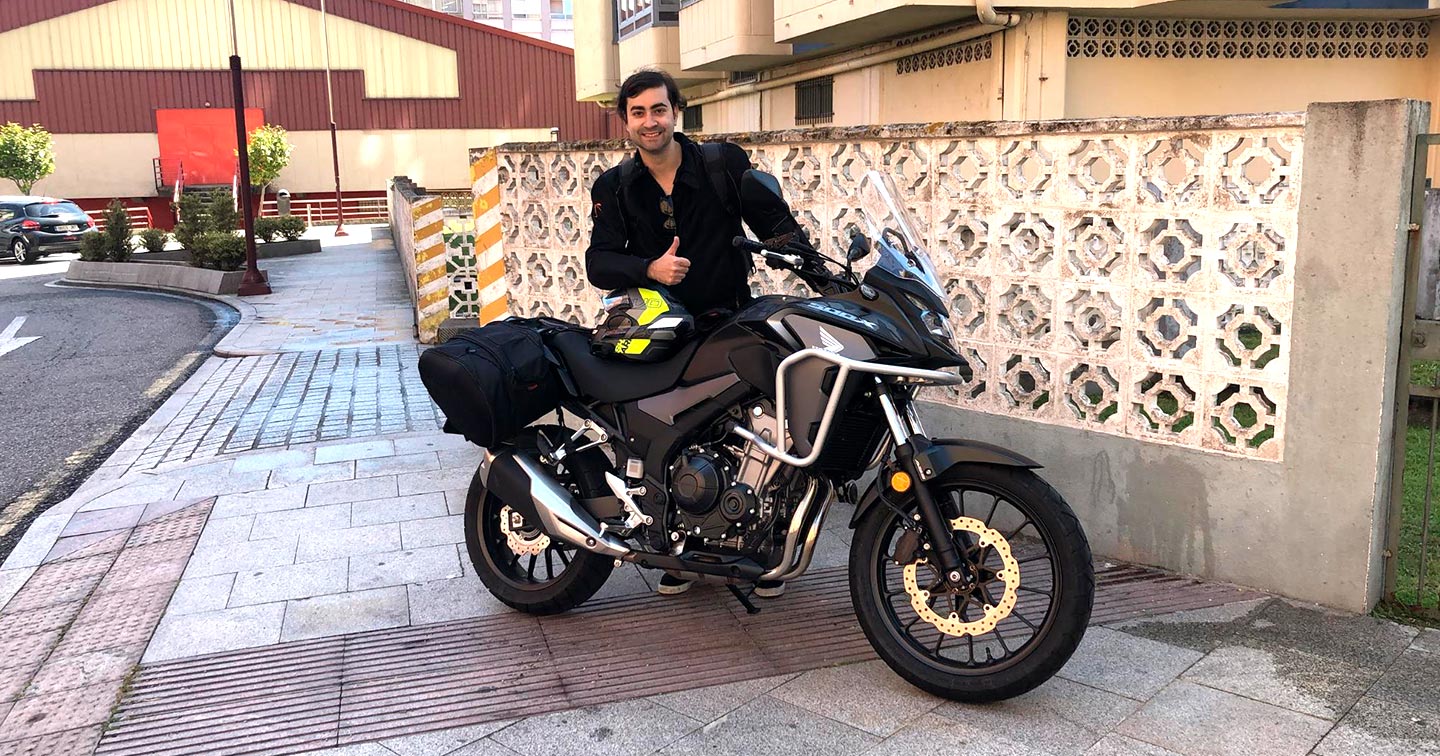 It was during a flight from Tokyo to Barcelona when the switch suddenly flicked. As Calcutta slipped beneath my window, a colony of lights twinkling below the clouds, the memory of a dusty old history lesson sparked in the backroom of my brain.

I remembered the tale of Portuguese explorer Vasco de Gama and how he had spent a year traveling to India at the end of the fifteenth century, braving all manner of obstacles to inch around the jagged African coast. What would he and his crew think of us completing the same distance in a few hours, demolishing their epic route while munching through our in-flight meals and devouring blockbusters on our entertainment systems?

Exploring foreign lands used to be as much about the journey as the destination. But now, I thought to myself, when we go traveling we ignore the actual travel bit. All the stuff we treasure – the sun, the sea, the surf – happens when we arrive. The journey is just an annoying routine, a price to pay for all that fun at the end.

Over time, the idea that flickered into life above Calcutta’s smoggy skies became a mega-watt beam, lighting up a route in my mind. I began plotting my own epic journey, one which would take me across Spain, my home country, and give me a small taste of what those Portuguese explorers must have felt 500 years ago.

All I needed was an opportunity.

If Vasco da Gama were alive today, he’d have fitted in nicely at Mobile Jazz. It’s a company which loves traveling and has embraced the possibilities of remote working since day one.

Mobile Jazz organizes a summer camp every year, giving all the team the chance to meet in a single place, along with their families. One of the downsides of working remotely is that you spend literally hundreds of hours speaking to people you’ve never met in person, and summer camp breaks these barriers down. It turns 2D webcam images into real people, and converts colleagues into friends.

To reach the summer camp, most people fly in to the nearest airport. That’s what I’ve done myself, every year since I joined the company. This year, however, I proposed something different to the organizing team:

“What if you pay me the fuel to drive by motorbike instead of paying for a flight?”, I asked.

“Sure! But take pictures and write a few bits about it!” was the answer that came back.

But convincing our summer camp organizers was actually the easy part. Now I had to figure out how I was going to put my idea into practice.

My route would take me from Galicia, where my family still lives, to the Catalan Pyrenees. A total of 1,168 kilometers via unyielding mountains, rugged deserts, snaking country roads and vast expanses of emptiness.

I left Vigo on Wednesday July 17 with my brand-new Honda. That picture you saw at the start was taken just as I set off. My father was the cameraman.

Of course my dad couldn’t fully understand why I would ride 1200km just for pleasure – he’s a sensible guy, after all. But there was a glimmer in his eye, a flicker of excitement that he couldn’t hide.

I chose to cross the northwest of Spain as fast as possible, as I was already quite familiar with the area. But the bad weather and strong cross-winds that buffeted me on the Galician roads soon made me question the wisdom of what I was doing.

I was still close to home, and knew I could always come back and book a flight for the next day. If I told you the thought never crossed my mind as those winds smashed into my bike, I’d be stretching the truth well beyond breaking point.

Eventually, however, the storm broke, and the Galician mountains melted into the endless plains of Castile and Leon.

I decided to leave the highway at this point, and check out the rural roads which knit Castile’s constellation of beautiful villages together.

Like the small American towns celebrated in a million Hollywood films, each of these villages had at least one bar, for the inhabitants to sip beers and shoot the breeze. As well as a cool drink, they gave me a chance to get the lie of the land.

After some initial shyness, I began to open up. Questions like “how many people live in this village?” or “how do you make a living?” went down extremely well with the local people, who were delighted someone from outside the area was peeking into their world. It was amazing for me, too, bringing to life a region I’d only read about before.

I’d learnt in school that Castile is the bread-basket of Spain. But when a Castilian tells you how the bread is actually produced, while guiding you across the vast fields with a sweep of their hand, the story gains flesh and bones.

As the afternoon stretched out I began to feel tired and decided to book a hotel. After checking the map, I worked out that Burgos was my best bet.

Burgos is a mid-size city famous for its cheese, its morcilla (black pudding), an extraordinary cathedral and the Atapuerca caves in which the oldest Iberian human remains, 1.2 million years old, were discovered.

Unfortunately, 20km before arriving at the hotel I had my first setback. One of my panniers, the bags strapped to the side of the bike which carried my belongings, came loose and got snarled up with the exhaust. In fact, it had caught fire. Which was, well, a little concerning.

After a few agonizing moments I was able to remove the side pannier before the fire spread to the motorbike itself. Unfortunately, all the contents of the bag were burned. Including every stitch of clothing that wasn’t attached to my body.

After calling the emergency services so they could come and clean the road for other drivers, I eventually got back on my ride and arrived at the hotel in Burgos exhausted, starving – and with absolutely no clean underwear. However, after taking a hot shower and getting a bite to eat, the situation didn’t look as bleak. I even started laughing as I lay in bed, just thinking how fortunate I was after all.

The mood didn’t last. The next day, while trying to buy new clothes to replace the scorched remains of my old pannier, I parked on a slippery surface and the bike slid over, smashing the gear switch.

This had never happened to me in more than five years riding various motorbikes. I was a bit pissed off and, as anyone would in that situation, I started to question the reason for my bad luck.

Eventually, the voice of reason pulled back the veil of anger. You can’t go looking for adventures and then complain when you find them, it told me. It was right, too.

But no matter how sanguine I was about the situation, I had to resolve it. Beautiful as Burgos is, I didn’t want to get stuck there. I dived into the nearest shop and asked for a motorbike mechanic. They told me how to find Motos Fran, a small independent shop.

I had to drive almost two kilometers at 5 km/h, trundling along in first gear, to arrive at Fran’s small shop. He was a motorbike enthusiast and a really nice guy. After explaining to him the situation he was kind enough to fix my bike – even better, he did it in double-quick time.

Just an hour after finding the shop, I was back on the road to the Pyrenees. Well, actually, I made one final stop in Burgos to buy new underwear, as well as a rather fetching pink bag which you can see in the photo below.

If Castile was nice, it had nothing on La Rioja.

The name is known around the world for the quality of the region’s wines. But again, one thing is reading about a snippet of its history on the side of a bottle and another thing is being enveloped by the endless vineyards, standing there proudly in the baking sun, just as they have for centuries.

I stopped many times just to take some notes – and to write down where to go next time I visit.

After La Rioja, there was only one more hurdle to cross. But it was a substantial one.

Aragón, the penultimate region on my journey, is home to one of the world’s unique deserts. Called Los Monegros, its terrain has been likened to the surface of the moon, totally unlike any of the topography that surrounds it.

The weather can be brutal, too, In summer the temperature regularly nudges 40 degrees celsius, far higher than the surrounding area. Rain? The locals would probably struggle to remember what it feels like.

The views, again, were great. Crossing by motorbike at noon, however, wasn’t so pleasant.

Fortunately, after 100 exhausting kilometers I arrived in Catalonia – just as the sun started to slip away.

My Mobile Jazz colleagues urged me to stop on the way and arrive the next day. I had to choose between driving for another three hours along the twilit roads, or sleep alone in some small village.

In the end, it was an easy choice.

I jumped back on to the highway and flew across Catalonia. The route took me through the provinces of Lleida, Tarragona and Barcelona before finally reaching the Pyrenees.

The final few kilometers felt a bit scary. I was in the middle of the Pyrenees, totally alone, veering along the mountain roads with only the beam from my motorbike to guide me, and no cell coverage to bail me out if things went wrong.

Bad thoughts started to cross my mind. What if I hadn’t written the coordinates correctly? What if my phone stopped working for some reason? I was totally exhausted and hadn’t seen anybody I could ask for help.

Suddenly, from nowhere I saw flashlights dancing in the darkness, zipping one way and then the other. For a second I felt like an old sailor who sees a lighthouse in the stygian fog and realizes he’s finally reached dry land.

It was my teammates, waiting for me at the entrance to the house.

We spent the week learning about one another, telling stories, laughing and joking. It was a brilliant few days and sums up all that the company is about. Had I taken the plane, it would still have been an awesome week.

But, as Vasco da Gama would no doubt tell you, the destination is only half the fun.