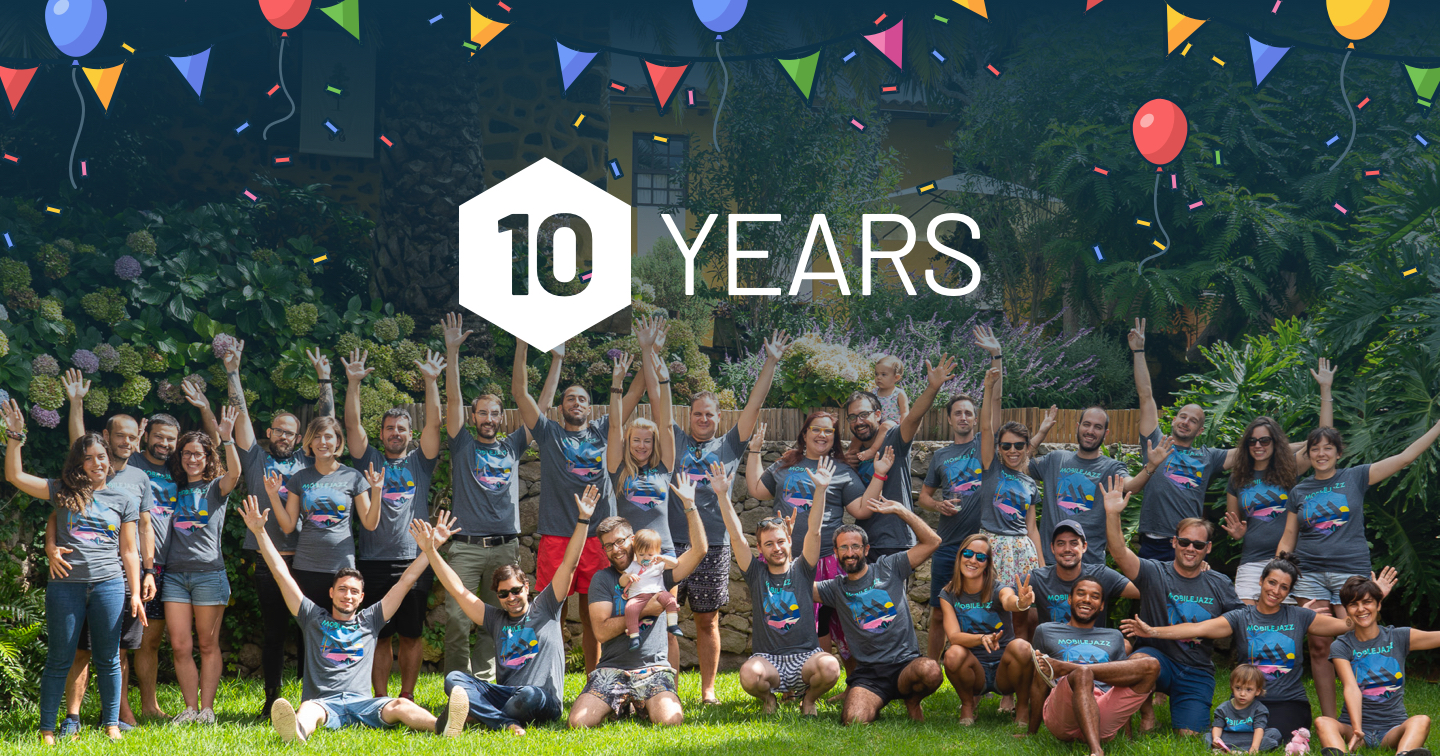 It was roughly ten years ago, in July 2011, when Stefan, Alex and I met doing freelancing work as software engineers. We were supposedly hired as “consultants” for an Android application, but we were barely “consulted” for anything. Instead we were just developers following orders, as it often happens.

During the lunch break, we patted ourselves on the back, discussing what a good team we made and how much someone else could benefit better from our experience. Dozens of such lunch breaks and a few months later, we finally found the courage to go looking for these clients.

In November, the three of us went to a couple of meetups and found someone who had an idea for an app. And just like that, we were in business.

Our initial goal wasn’t really to build a company. As freelancers, we were primarily interested in bundling our services together to support and learn from each other, and to cover each other during days off, after all, holidays were rare as a freelancer. Since we had very different backgrounds, together we could cover a broader range of technologies and services, and we knew that customers would benefit from that.

On the hunt for a place to work from that wasn’t our living room, we were fortunate enough to meet Hermés. Hermés not only offered us some space in his office, but we also got to work closely with him and his amazing team, learning a lot about kickstarting a company, building products, and managing a team. His advice profoundly influenced the values that Mobile Jazz was built on. Hermés, if you’re reading this, thanks for everything! 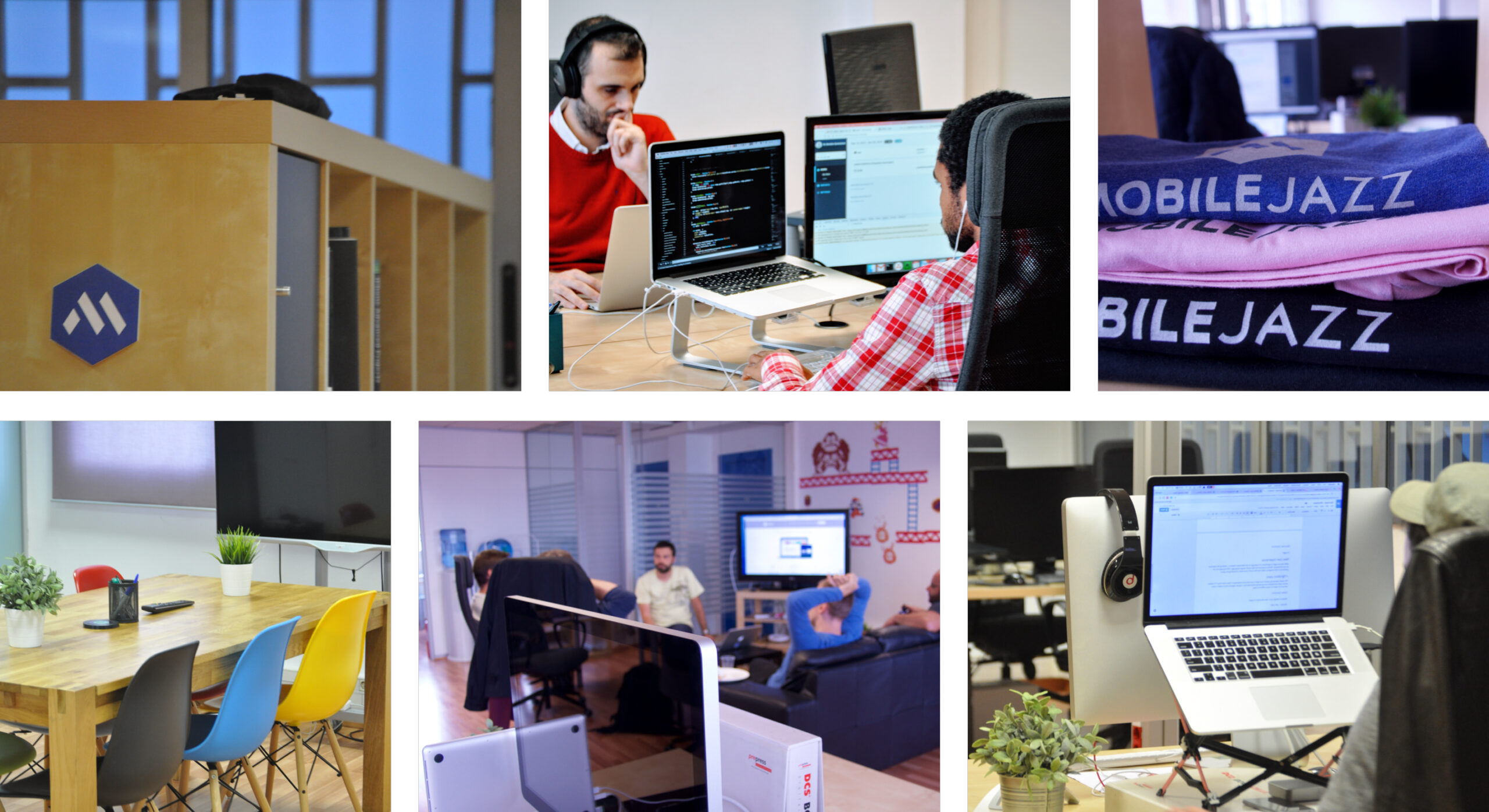 Despite having an office, we often traveled, so everything in the company was built in a “remote-friendly” way. Kanban boards were designed in Trello, documents were written in Google Docs and meetings were held in Google Hangouts (now Google Meet). Little did we know how important this setup would become later on.

As soon as we had money coming in, we were facing questions that we could no longer put off: What do we do with the money? Shall we distribute it between us? Shall we invest it back into the company, for example, to buy equipment? Shall we save it for a rainy day?

While this sounds like a pretty shallow conversation, it posed a more profound question: Where one spends the money signals what they value most. So what did we value most?

Quickly the money discussion turned into something much bigger. Something that we didn’t have to think about much as freelancers in the past.

Finally, we came up with three core principles:

As simple as it may seem, this list made a cornerstone of our future culture as a team. Whenever we were facing difficult decisions, we revisited the list:

Most of the time, it came down to this: given we have enough money to pay our salaries, do we optimize profit or happiness? And the answer was always happiness.

The execution was hard at first. We had to break the preconceptions on how most companies work, especially consulting companies. Their teams are often people with little experience who work endless shifts, people who don’t care much about their employers, their colleagues, their clients, or the projects they’re working on.

None of us wanted to work in a place like that, and we had the opportunity to start from scratch, so we did. Today, we sometimes forget how unusual this is in the world we live in, because it has become so ingrained in our daily routines and in who we are as a team.

After the App Store launched only three years prior in 2008, finding new projects was relatively easy, even for someone with little sales experience like us. Mobile apps were a new thing and everyone wanted to be a part of it. Very few people knew the technology well, so we had a head start over most companies and were able to grow quickly.

The technology being so new also came with its own set of problems: most people didn’t know what could or couldn’t be done, and didn’t really understand the complexity involved in what they were trying to build. We spent a lot of time educating potential clients and sending out quotes that were rejected because the projects required far more budget than anticipated.

At the time, Barcelona was just starting to grow a startup ecosystem. As one of the pioneers in mobile technologies we were able to participate and lead in Barcelona.io focused around startups, and NSBarcelona focused on iOS development. We merely contributed because we had fun doing it, and it was helping the community. Still, this unexpectedly helped us become known and build a network of potential clients and hires that enabled us to grow.

Additionally, as a remote-friendly company, we were not restricted to finding clients and hiring in just our city. We could hire anyone in our time zone or a similar one, meaning anyone in Europe, Africa, Middle East, and even eastern America or western Asia.

After only a few months, we couldn’t handle the incoming requests anymore. Based on our “quality first” approach, we carefully selected which projects we would accept. It was never our intention to grow really fast or to get as many projects as possible. Instead, we consciously made an effort to consolidate the team values and serve our customers with excellent quality at all times, again guided by our “optimizing for happiness” principles.

Not only did our team and client base grow, but we’ve also added more services along the way. Originally we were focused on the development of iOS and Android applications, hence the name “Mobile Jazz”. But over the years we’ve added design, web application, development, consulting, and hosting to our portfolio of services.

Skills, attitude and mindset. Whenever someone joined Mobile Jazz, these were the three components we took into account. We’ve always looked for people who, of course, are great at doing their job but also someone who is proactive, makes suggestions, and is willing to grow personally and professionally.

While we’ve kept our team relatively small, during these past 10 years many people have worked with us, all from different backgrounds and locations. We’ve learned a lot from each other and together we kept pushing for the company values we stood for.

In fact, we still have members who started in the early days and never left despite receiving generous offers from technology companies like Facebook. Even those who left the company at some point recognized the impact Mobile Jazz had on them by learning new skills or simply enjoying the time with us. We’ve made many friends along the way, and continue to stay in touch with them.

Having an office brought us many joyful moments: we played Mario Kart after lunch, hosted meetups, chilled on our rooftop terrace, and had beers and BBQ nights after work.

After a few years however, it became obvious that the office didn’t add much value to the team anymore. We were going there less often, and the fact that some people were fully remote created a gap between them and the partially remote workers.

Luckily, the logistics of closing the office were pretty straightforward. In fact, they had been ready for years. The one thing holding us back was the sense of loss we felt about leaving a space that had been “ours” for a long time. But it was time for a change, time to say goodbye to our first home.

To make up for the loss of the office we decided to meet up more often. But this time, the world was our oyster – our office could be anywhere we wanted it to be!

Being remote-friendly brought us a lot of advantages: it enabled us to work from home whenever we wanted and go on workations worldwide, including Thailand, the Italian Alps, Tarifa, Cape Town, Sardinia, and Martinique. 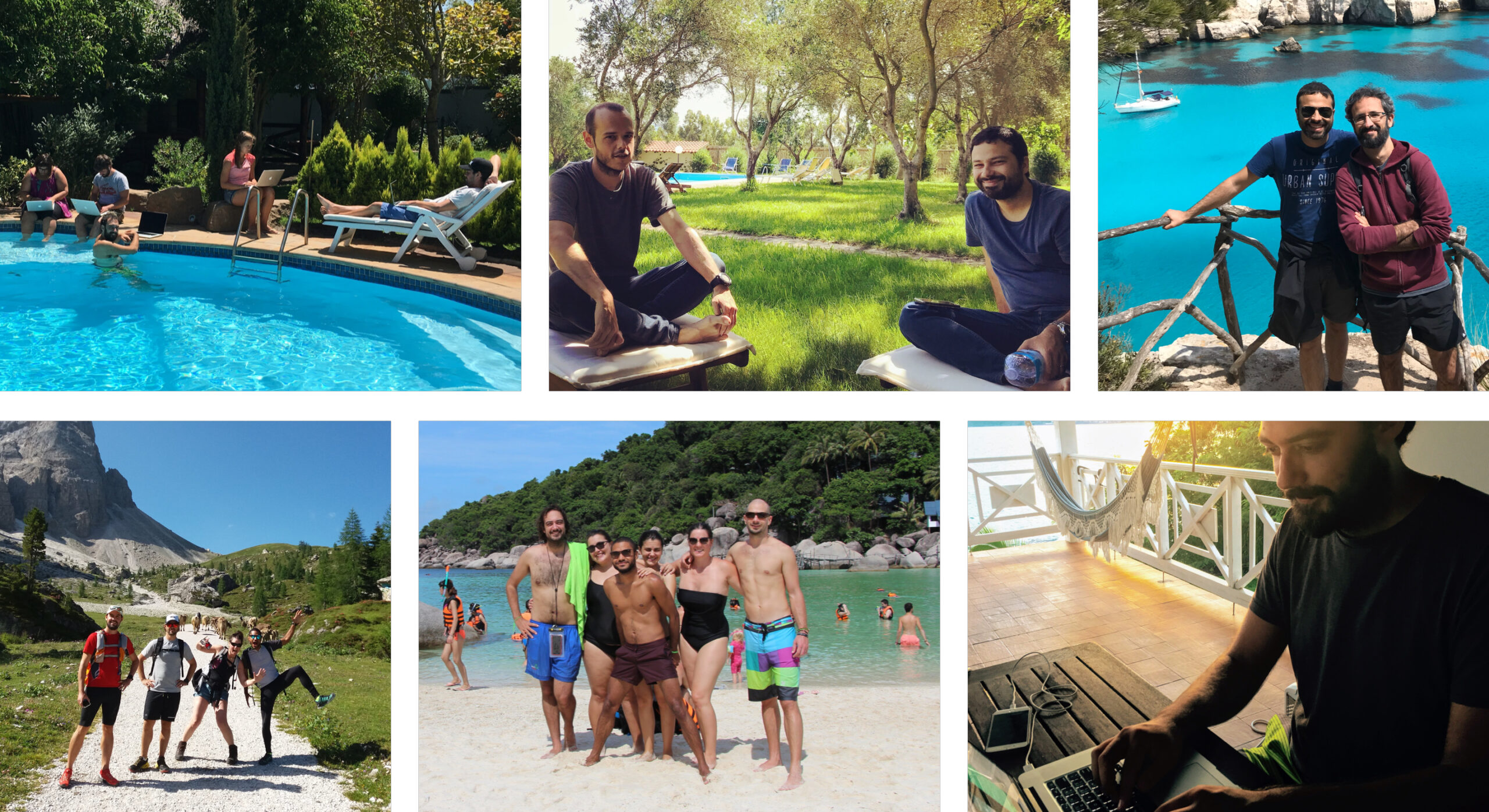 In hindsight, thanks to being a fully remote company for years, we were very fortunate that COVID-19 didn’t affect our operations at all.

Many times we were contacted and asked for things we had never done in the past, but we had a good team, experience in the field and were eager to explore new territories. It was definitely not always a smooth process: we failed, learned and grew many times. But looking back it was totally worth it.

At first, we were working with small companies and often startups, but eventually things started to scale to the point where we found ourselves working with big names such as Medtronic, AVG, Skyscanner, Airbus or the Royal Australian Air Force.

In total, we’ve worked with more than 140 clients up to this day, from many different industries and scopes.

Overall, we always enjoyed working on impactful projects: the thrill of offering a good challenge to the team or having a positive impact, such as NGOs like Worldreader or EDI Institute. These were the kind of projects that we enjoyed most.

Even if we are usually considered to be a consulting, design, and engineering company, our strength does not only lie within the technology space. We’ve also helped dozens of customers on the path of building their products and even created some of our own, admittedly with varying degrees of success.

Over the past ten years, we’ve learned a ton about building businesses, marketing, analytics, and many other things that can be technology-assisted but are not technical in nature at all.

The most notable of our own products is Bugfender, a tool for software developers just like us. Today, Bugfender is an entirely independent, profitable company with its own team and roadmap, and also without an office.

We’ve come a long way since that lunch break in 2011. Today, our team comprises 20 amazing people and is still growing with the same principles that have fueled us on our entire path. We are incredibly proud of the team, the culture and the company we’ve built. 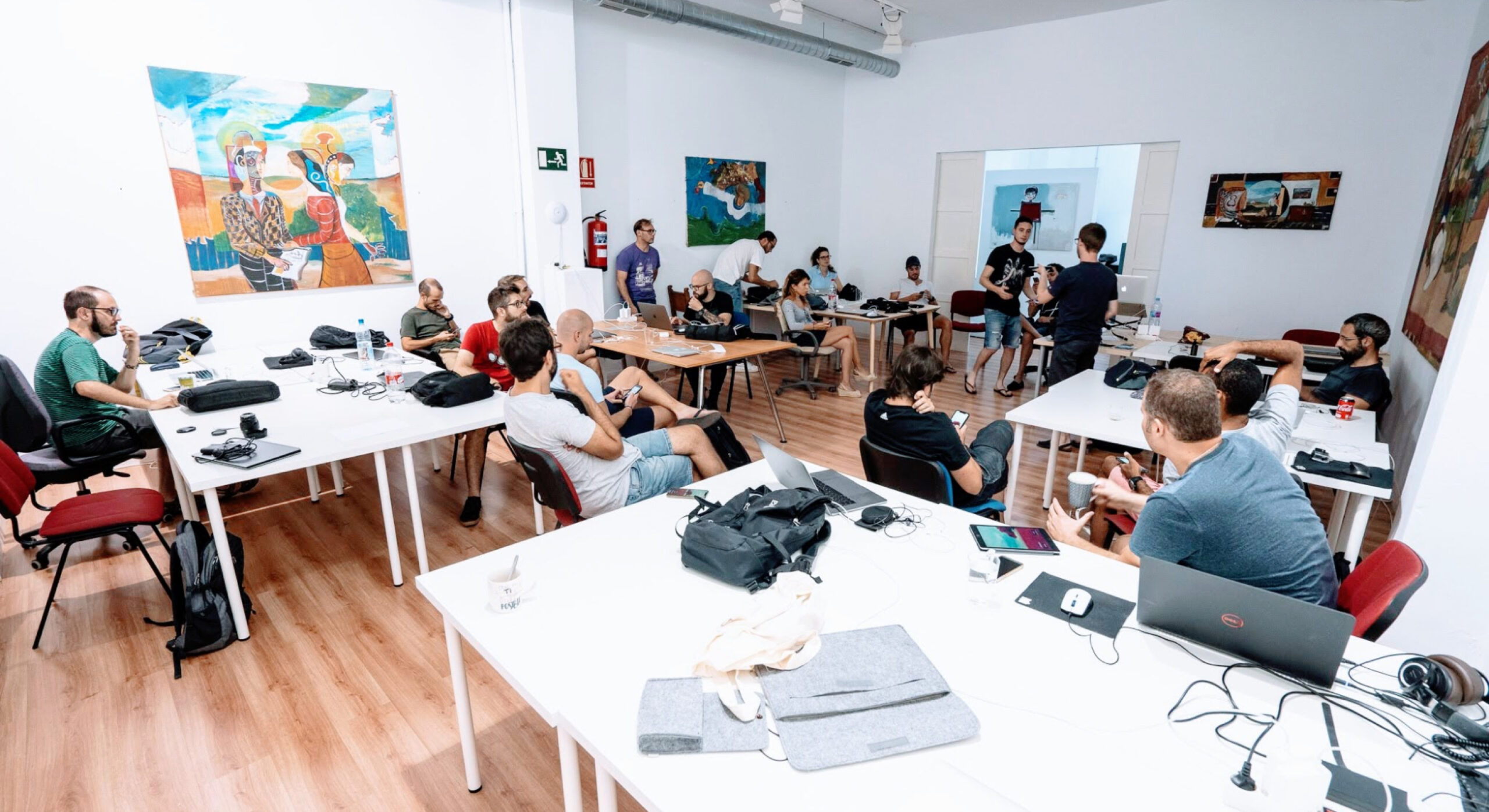 While we have achieved a lot already, we are also excited for what’s yet to come. Trying new technologies, meeting new people, and building more businesses together with our team and our customers.

Thank you, to everyone we’ve met during this time: our present and former team members, customers, mentors, and friends. Especially the very first ones who trusted us to join their journey and enabled us to do everything we’ve done over the last 10 years.